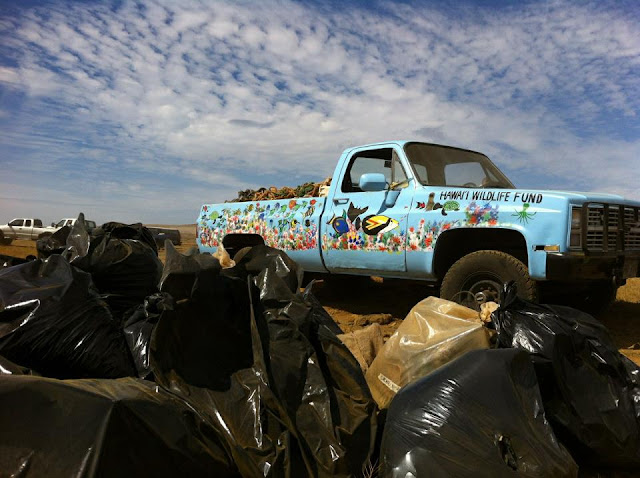 What's in your ocean? 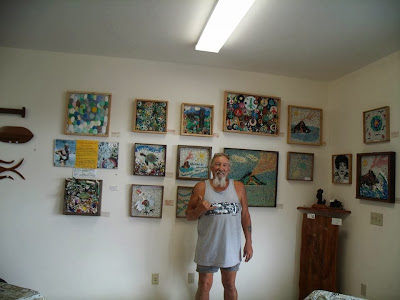 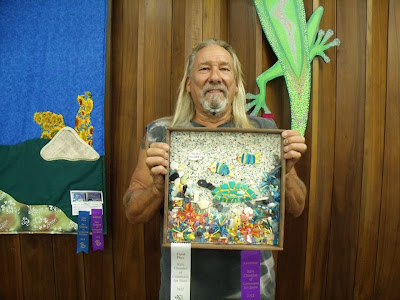 It was supposed to be paradise, people are always dreaming of relaxing on the pristine beaches of Hawai’i. Yet, I looked around, horrified at the mile-long stretch of beach a mere 7 miles from South Point on the Big Island of Hawai’i -what I saw in front of me painted a very different picture. Everything from toothbrushes to bottle caps to fishery plastics littered the beach. On the one hand I was devastated at the environmental neglect but was able to find solace in the fact that helping with this Big Island beach clean up would help, even minutely, with the problem.
While holidaying in Hawaii with my dear friend, Stephanie, we made the decision to spend one weekend away from the craziness of Waikiki and took a short 40min flight over to the Big Island of Hawai’i. For me, initially arriving in this natural and seemingly untouched land was reminiscent of my home for the previous 12 months – New Zealand’s Far North. We weren’t there for a nice kicked back and relaxed holiday, though, we had work to do – we were teaming up with the Hawai’i Wildlife Fund and on our second day on the island we were taken to help with a beach clean up.

After waking up early and driving nearly two hours down the west coast of the Big Island, we met up with Bill Gilmartin and Catherine Spina, two volunteers with the Hawai’i Wildife Fund. Laura Bly, a travel writer for USA Today, also joined us and together the five of us were going to learn a bit more about the problems that Hawai’i’s coastlines have with marine debris.
After an hour-long bone-jarring offroad experience in the back of Bill’s massive pick-up truck – which was outfitted with all the supplies needed to do a beach clean up – we finally made it to the littered shores of an otherwise secluded beach. During the drive, Bill told us all about the Hawaii Wildlife Fund, that they helped organize the first community shoreline cleanups back in 2003 and since then have helped to remove more than 145 metric tonnes (roughly 320 000 pounds) of marine debris on a nine-mile stretch of coastline. The Hawaii Wildlife Fund continues to organize beach clean ups every two months, with hopes of ridding the beaches from as much waste as possible.

As I jumped down from the pickup truck and walked along the beach, ready to help in any way I could – I couldn’t even muster up words to describe what I thought of the sight.
“Oh my God.” Stephanie kept repeating, absolutely horrified at the sight of an otherwise beautiful stretch of beach completely littered with debris that had been washed ashore from the Pacific Ocean.

Catherine then told us some of the reasons as to why this stretch of beach was buried in debris, yet ten-miles away there were people happily fishing, surfing and swimming just off shore. Since Hawai’i is essentially in the middle of the Pacific Ocean, certain areas off of it’s coastlines are where multiple currents meet. Along with these currents are bits (big bits) of garbage that have gone into the ocean. Not only is it a complete eyesore when it washes up along the beaches, but it is a significant threat to the marine life and ecosystem as a whole. She went on to tell us that one of the most common things to wash up on shore were single-use plastics. We continued to have a lengthy conversation about the effects that single-use plastics – you know, the disposable plastics that most people enjoy because they’re too lazy to make simple changes to their everyday lives – and I found myself walking away from the conversation looking to do anything I could to reduce my own single-use plastics consumption.

For the following few hours we did what we could and listened to Bill and Catherine tell us all about what they do, how they’ve been trying to spread the word and educate people about this very serious environmental issue.
As Stephanie and I returned to our rental car, I felt completely enraged. How could this be happening? Why wasn’t the US government (or other governments around the world) supporting more large-scale cleanup efforts? Why spend billions of dollars to fight in stupid wars when they could easily put more funding towards environmental issues? To actually witness the beaches first-hand made me want to stand up and do something and since then I’ve made easy changes in my everyday life – switching from disposable waterbottles to reusable ones, ensuring I always use a reusable bag with me, and not using straws or plastic lids on my takeaway coffees.
Want to do something? Check out the Hawai’i Wildlife Fund or your own local environmental groups and see how you can help. If you happen to be on the Big Island of Hawai’i on April 21, head over to Hilo Bayfront and check out Ocean Day.
About Melissa
Friends and activist ECO/ARTIST Don Elwing at a recent exhibit of over 40 works of ''Awarenes Art'' made from marine plastic micro debris collected at Kamilo beach, Big Island. 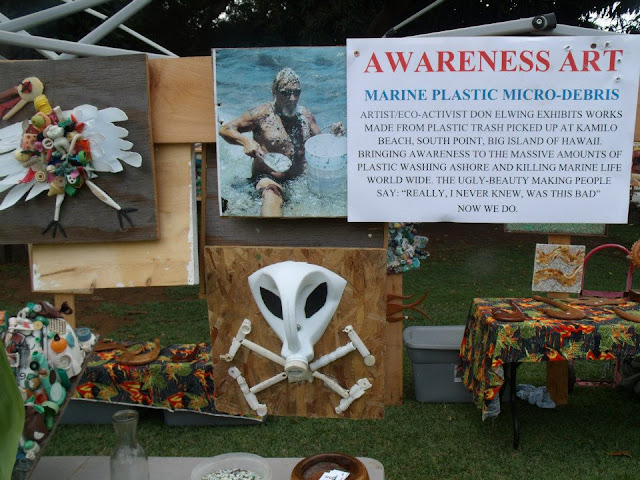 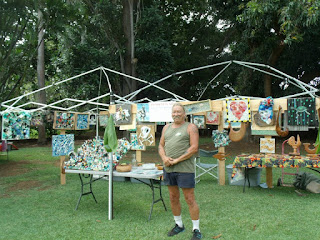 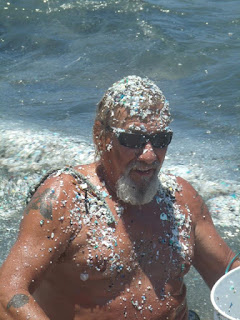 Some of Don's 'AWARNESS ART
from Marine Plastic Micro-Debris' 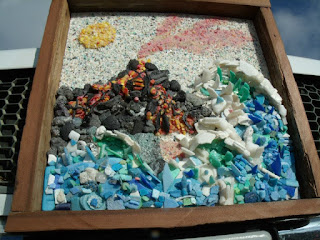 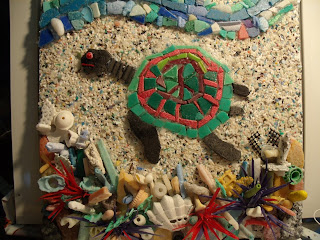 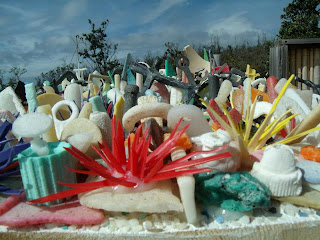 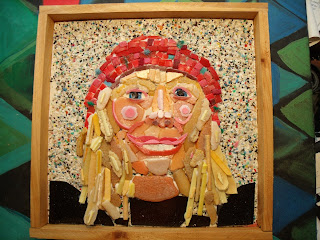 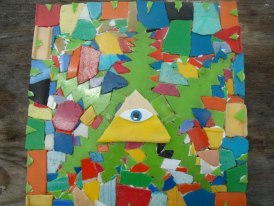 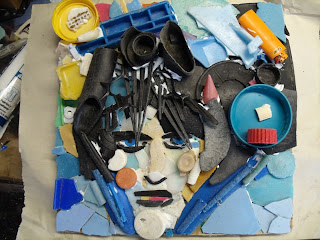 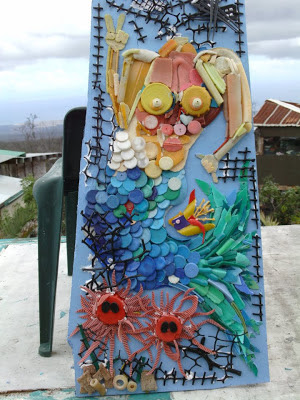 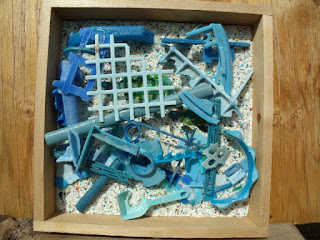 
--Koa cut into the shape of the Big Island 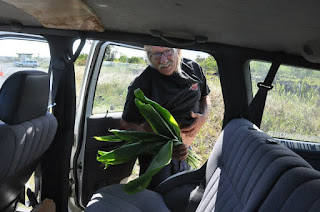 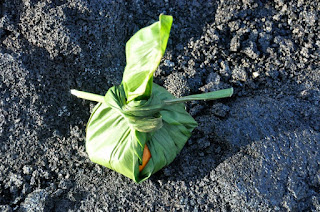 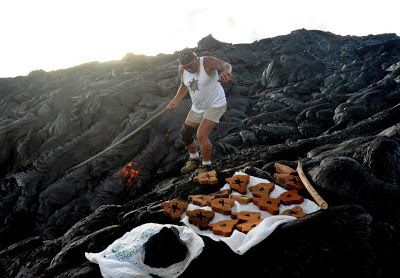 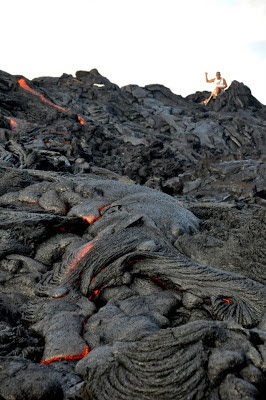 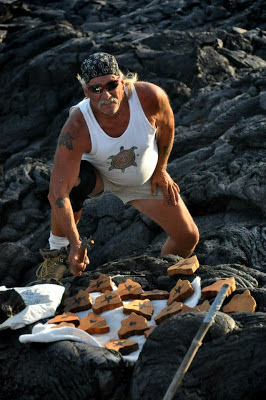 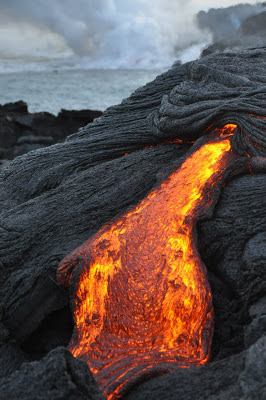 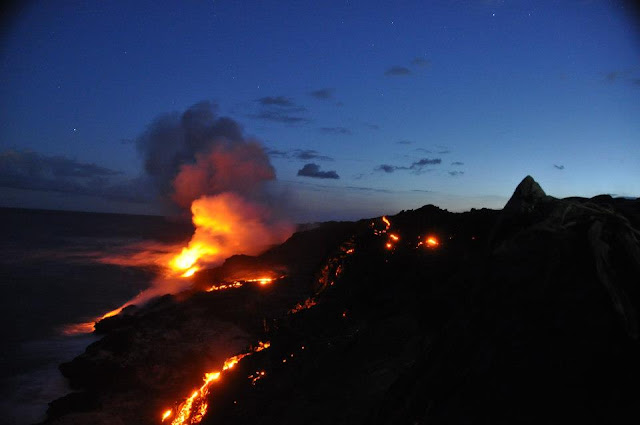 For more arts and infos please find Don on 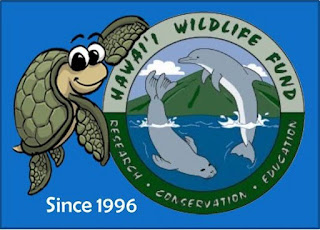 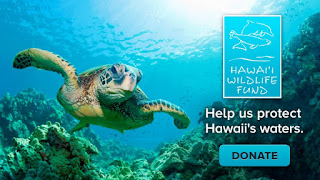 Thank you and Mahalo for Don 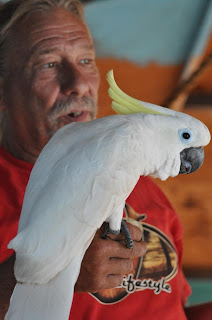 Please Donate if This Blog Helped You

HawaiianBreeze
Planet Earth
I remember moving through the great forests as I floated to Earth, where we gradually learned to be human. During that time of the Golden Era at the very beginning, we were in harmony with the land and ourselves... At the beginning of time, we were all highly evolved spiritual beings. We lived our life in accordance to the sacred template of Cosmic Law, which we fully honored in thought, word and deed. Gradually we became intoxicated with the dream of separation and ego identification, listening to the mind, a collection of thoughts and forgetting the song of love and unity... After thousands and thousands of years of being caught in the dreams of the mind; incarnation after incarnation, we are nearing the end of the downward spiral into material existence and are now ready and able to begin the journey of awakening to our true Beingness. At the assigned time, we will instantaneously awaken into the truth of oneness, of unity and chucle how seriously we believed the dream was real...